Officials investigating reports that US citizens are crossing border on pretext of visiting Alaska, only to stay in Canada 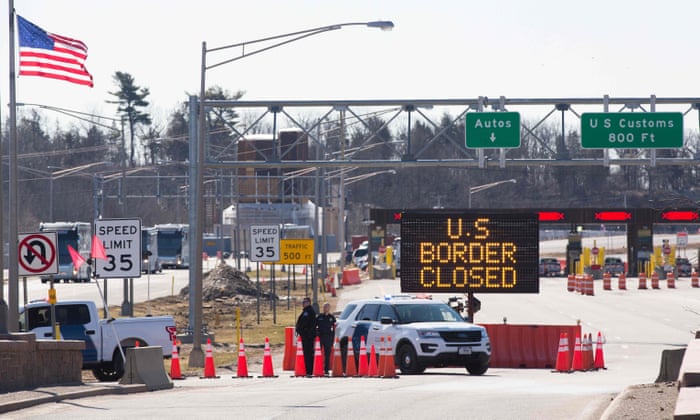 For some Americans, the prospect of visiting the Rocky Mountains without hordes of visitors cramming its picturesque trails and alpine towns, is so tempting that they’re prepared to risk arrest.

Canadian officials are investigating reports that American tourists are making covert forays into the country, violating a border closure imposed to slow the spread of coronavirus.

The frontier has remained closed since 21 March, but US citizens without coronavirus symptoms are still allowed to enter Canada in order to reach the US state of Alaska.

Such travelers are required to use drive-thru windows for food and pay for gas at the pump, and must undergo quarantine if they use a hotel.

But a string of reports suggests that some US citizens are crossing the border on the pretext of visiting Alaska – only to stay in Canada.

One resident of Banff, Alberta, posted on Facebook that a Texas family had visited a restaurant, allegedly telling staff they had found a “loophole” in travel restrictions, allowing them to secretly vacation in the region.

“[The family is] now wandering around Banff, no masks, no distancing, no 14-day quarantine. There was also another similar incident same loophole used for another group of visitors from Seattle,” said the post. “This is more than alarming!”

Such reports have prompted the deputy prime minister, Chrystia Freeland, to plead with Americans to avoid entering the country.

“I would say to our American friends and neighbours: I love the Rockies, too. I grew up in Alberta. Personally, I can think of no better place to spend time. But now is not the time to visit. Hopefully, we will be back to normal at some point soon,” she said. “These measures are in place for a reason. They are to protect us, and they are to protect our neighbours.”

The United States has more than 2m documented cases of the coronavirus, with new surges reported in a number of states. Earlier this week, the two countries agreed the border would remain closed until at least 21 July.

“We’re not yet sure whether we really have a large issue or whether we have a couple of isolated events that have been widely circulated,” Staff Sgt Michael Buxton-Carr of Banff RCMP told Global News, following at least two reports of Americans vacationing in the region.

In the case of a clear breach of the rules, Canadian police could lay charges – or escort lockdown scofflaws to a government quarantine facility.

Coronavirus in Africa: ‘Signs of hope’ as cases level off

Do masks mask our emotions? Not necessarily, says one expert