Coronavirus: What’s the future for the office?

Before the coronavirus pandemic, the office was where millions of us spent about a third of our time.

However, since the lockdown, almost half the UK’s workforce say they have been working from home – and some companies have hinted it could become the future.

“The notion of putting 7,000 people in a building may be a thing of the past,” said the boss of Barclays,

while Morgan Stanley’s chief said the bank will have “much less real estate”. Businessman Sir Martin Sorrell said he’d rather invest the £35m he spends on expensive offices in people instead.

The game is up for the office as we know it, suggests Bruce Daisley, who is the author of The Joy of Work.

“Unfortunately, we might get misty-eyed about it but I think the office in the form it used to be is probably now a thing of the past,” he told BBC Radio 4’s Today programme. 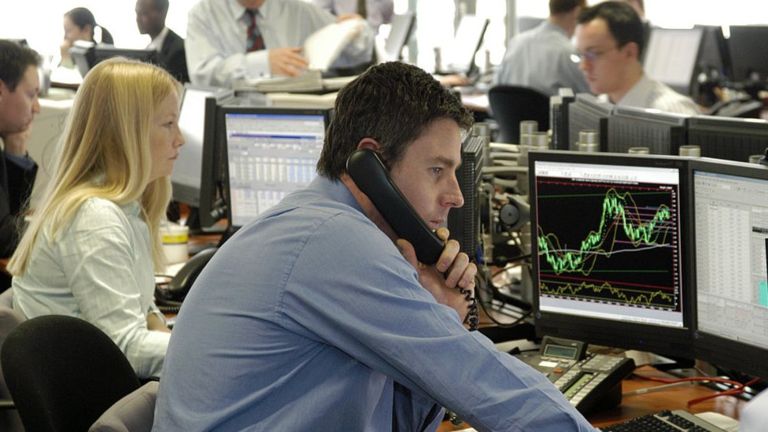 “I was chatting to someone who works at a major media outlet last week, and he said we used to have 1,400 people coming into this office every day. For the last eight weeks we’ve had 30 people and the product hasn’t changed.

“He said anyone who thinks things are going to go back to the way things were is bananas.” 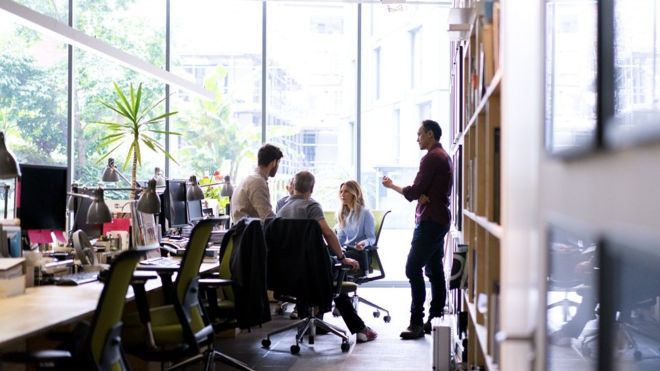 But declaring the end of the office is not clear-cut, says Prof André Spicer, from City University’s Cass Business School. He predicts a “radical decrease” in the amount of time people spend in the office – but says office working will not be over for good. One reason, he suggests, is that home-workers tend not to get promoted as quickly – “They tend to get overlooked”.

So with a recession on the way, people may want to be visible.

“Particularly in times of economic crisis, people will start thinking: I want to be in the workplace, the boss needs to see me,” he adds.

Prof Spicer also suggests offices will remain as hubs where senior managers are based, with employees travelling in once or twice a week to meet with their bosses. That seems to be similar to Twitter’s plan, allowing staff to work from home forever – although keeping offices open if people want to come in.

Home-working is not new – it’s been on the up in recent decades – and many companies have already been trying to save money on rent by hiring co-working space.

“I think cost is a big driver,” says Prof Spicer. “I think a lot of companies will say we are spending all this money on rent so let’s move to more home-working. That was already happening.”

How will it affect us?

Many of us have already discovered some of the perks and problems of working from home. Some are obvious – no commute; less chance to socialise with colleagues. But others go to the heart of our identity.

“I think we should all howl at what we’re losing,” says Lucy Kellaway, who has written both fiction and non-fiction books about offices. “I think the most important thing about the office is it gives some sort of meaning to what we do. Most of what we do at our laptops – let’s face it – is pretty much meaningless.

“The best way of thinking there’s some point to it is having other people who are sitting all round you doing the same thing.”

She adds that offices keep us sane and give us a routine.

“And once we’re there we can be a different person,” she told Today. “I don’t know about you but I’m absolutely sick and tired of being the same person all day as I slouch around at home. I want to have different clothes, go into the office, see different people who become my lifelong friends and have a complete laugh when I’m there.” 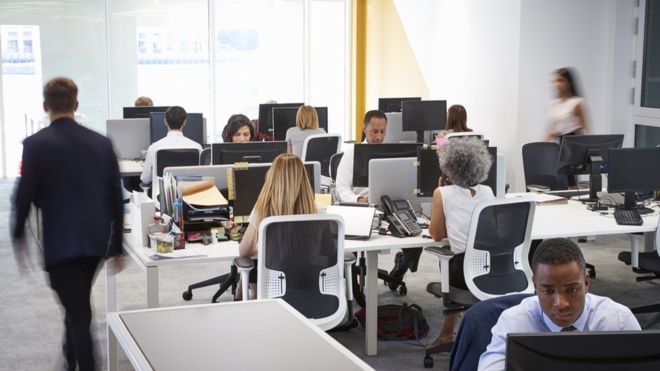 Prof Spicer says studies show that people who work from home are more productive and happier – especially without the commute, one of the main factors that make people unhappy. But among the downsides, he cites one study showing home-workers feel they are “in exile” and thus become “needy towards their bosses”.

“Catching their boss’s eye becomes their main job. It’s that desire to be seen to be doing stuff and when you’re not you become a bit worried and paranoid. That’s a downside for employees and employers.”

Another disadvantage is the risk that home-working could “exacerbate inequalities,” says Prof Spicer – for example between those who have more space at home than others, and between men and women.

“In my sector, academia, one big effect is journal submissions from women has massively gone down. The obvious reason for that… most childcare and dealing with home tasks is still picked up by women.”

Meanwhile, younger workers will miss out on learning from their more experienced colleagues, and those informal conversations that lead to good ideas will be gone, adds Mr Daisley.

“Unfortunately I think if we’re not careful a lot of companies will get rid of the magical things that made work so productive and creative,” he says.

For now, many office workers are staying at home and when they do go back,the UK government recommends staggered shifts, one-way routes, packed lunches and two-metre distances.

But whether home-working is temporary or here to stay, the longing for office life continues for some. “Meetings are very much maligned,” says Ms Kellaway, “but goodness I would love to sit around a real meeting table with some real people and a real plate of biscuits right now.”

How to work remotely full time

In 2015, managers at San Francisco social media start-up Buffer decided to shut their $7,000-a-month office when they realised most employees were working from home. Now, its team of 90 is scattered around the globe. One worked every day while travelling the world. Another did so from a cruise, although the patchy wi-fi made it far from ideal.

“We do ‘masterminds’, which helps partly,” Andy says. “They partner you up with someone else in the company and you have a bi-weekly or weekly chat. And we have a Slack channel called ‘water cooler’ for just random stuff that comes up.”

2. Take time to loop people in

“That serendipitous discovery you would get over talking to someone at lunch or in the break room has to be done really creatively and intentionally,” Carolyn says, “and that takes time and effort. For example one of our team mates, Nicole, does a ‘things you might not have known about’ weekly summary where she combs through all the communication of the entire company and surfaces interesting things.

“That takes a lot of work. But that’s the kind of thing it takes to make it work in a company of this many people who are all spread out and don’t get to go for lunch together.”

Group video chats are also recorded then shared with colleagues in other time zones who could not join in.

“We do a retreat every year and then we do little summits within teams that are more work-focused,” Andy says. Sadly, this year’s retreat in Greece for all Buffer’s employees was cancelled because of coronavirus.

Employees in the same country or neighbouring countries will also meet up, and someone goes to meet new employees in person.

“The only thing we did which was truly catastrophic was experiment with having a truly flat structure,” Carolyn says. “We pointed to this concept that if you give individuals freedom, they will do their best work. But we learned that managers really do add a lot of value and structure. People really liked having someone they were accountable to, someone who they talk to regularly and unblocks them with challenges.

“When we got rid of the concept of managers and we were remote, that was kind of a disaster. Communication just broke down.”

Six of the most promising treatments for Covid-19 so far

No COVID-19 Models Are Perfect, But Some Are Useful