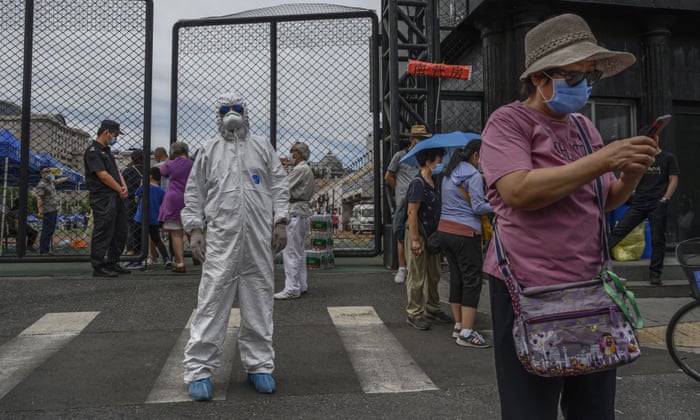 Authorities in Beijing have described the city’s coronavirus outbreak as “extremely severe” as dozens more cases emerged, travel from the city was curtailed and its schools and universities shut down.

Beijing residents were told to avoid “non-essential” travel out of the capital, and anyone entering or leaving will be tested for Covid-19.

Additional neighbourhoods were fenced off on Tuesday, with 27 now designated medium risk, which means authorities can impose stricter restrictions on the movement of people and cars and can carry out temperature checks. One has been designated high risk. 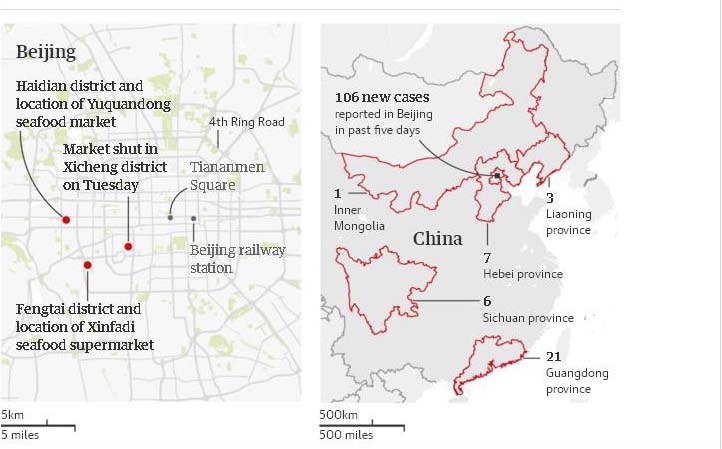 “The epidemic situation in the capital is extremely severe,” Beijing city spokesman Xu Hejian warned at a press conference. “Right now we have to take strict measures to stop the spread of Covid-19.”

Entry restrictions have also been brought back in many residential compounds. Health authorities said sealed-off residences and people in quarantine would have food and medicine delivered to them.

Schools, which had recently re-opened, have been ordered to resume online classes, and universities required to suspend the return of their students.

Companies were told to encourage working from home, indoor sports and entertain venues have been shut, and libraries, museums, art galleries and parks must now limit capacity.

Authorities also reported four new domestic infections in neighbouring Hebei province, while a case reported in Sichuan province was linked to the Beijing cluster. Some other cities across China warned they would quarantine arrivals from the capital.

The outbreak is the most significant in China since February, prompting fears of a second wave and questions over how the virus was able to spread given severe quarantine measures taken by authorities. The outbreak is potentially embarrassing for Beijing, which had declared victory over the virus and ordered citizens back to work.

The capital, where measures were among the strictest in the country, had reported no new locally transmitted cases for 56 consecutive days before a cluster of diagnoses began on Thursday. Before that most new cases had come from Chinese nationals returning from abroad.

On Tuesday, state media appeared to push the idea that the virus had come from abroad. Wu Zunyou, chief epidemiologist at the Chinese Centre for Disease Control and Prevention, said the strain was most similar to those seen in Europe, the US or Russia.

“It clearly indicates the virus strain is different from what it was two months ago,” he told state broadcaster CGTN. “The virus strain is the major epidemic strain in European countries. So it is from outside China brought to Beijing.”

In a similar vein, a deputy director at the pathogen biology department at Wuhan University, told state media he believed the new outbreak involved a more contagious strain of the virus than the one that hit Wuhan at the beginning of the pandemic.

Scientists in Europe said it was too early to tell whether the virus causing the new Beijing outbreak was different in terms of transmissibility from the original.

“Genetic sequencing could easily establish if it was actually imported from Europe. But with the limited information currently available, “the most that can be interpreted – if indeed it does look like being from Europe – is that it is good evidence of control of the original Chinese spread, and no resurgence of that virus,” said Deenan Pillay, professor of virology at University College London.

The outbreak – linked to 106 cases, including 27 reported on Tuesday – has been traced to the Xinfadi wholesale food market in south-west Beijing’s Fengtai district, which sells thousands of tonnes of food a day and which had been visited by more than 200,000 people since 30 May.

Samples of the virus were discovered on chopping boards used for imported salmon at the market, fuelling speculation it had come from abroad even though experts have said fish is unlikely to carry the disease and any link to salmon may have been the result of cross-contamination.

The World Health Organization’s emergencies director, Mike Ryan, said he expected Chinese authorities to publish the genetic sequencing of the virus in Beijing and supported their efforts so far. He said the idea that new outbreak was caused by imported salmon was not the “primary hypothesis”.

“A cluster like this is a concern and it needs to be investigated and controlled – and that is exactly what the Chinese authorities are doing,” he said.

After months of economic paralysis, authorities have tried to limit lockdown measures to parts of the city and encouraged residents to continue “life as normal,” while taking extra precautions.

Provinces as far away as Yunnan in the south have brought in rules requiring quarantine for people returning from Beijing. Shanghai authorities announced that all arrivals from medium– and high-risk areas have to undergo 14 days of quarantine. Some long-distance bus routes connecting Beijing and other provinces were suspended.

All indoor sport and entertainment venues in the city were closed on Monday. Coaches and players from the Beijing Super League football team, Guoan, have been tested and given a week off because their training camp was in the same district as the outbreak source, local media reported. In Xicheng district, which borders Fengtai, another market was shut after a coronavirus case was confirmed. Seven neighbourhoods near the market have been closed off.

More than 8,000 workers from the market have now been tested and sent to centralised quarantine facilities, and other Beijing wet markets, basement markets and more than 30,000 restaurants are being disinfected.

More than 76,000 nearby residents were tested on Sunday across almost 300 testing points, authorities said, and strict measures have been put in place, including school closures, and transport suspensions, including ride-sharing and taxi services.

Since the first case of the virus was detected last year in the city of Wuhan, China has reported more than 84,000 cases and more than 4,600 people have died.

Chinese officials and state media have been quick to defend the country amid fears of a possible second wave.

“Control measures have been in place in communities, three officials accountable were dismissed,” said the editor-in-chief of the Global Times, Hu Xijin. “US politicians will likely see a miracle that Beijing can have zero new cases in a month.”

Three people have been dismissed over the outbreak, including the head of the Xinfadi market, the local Communist party chief, and the deputy head of the district.

Health care workers, a fragile health system and the looming spectre of COVID-19 in Yemen