FILE PHOTO: A 3D-printed coronavirus model is seen in front of the words coronavirus disease (COVID-19) on display in this illustration taken March 25, 2020. REUTERS/Dado Ruvic/Illustration/File Photo 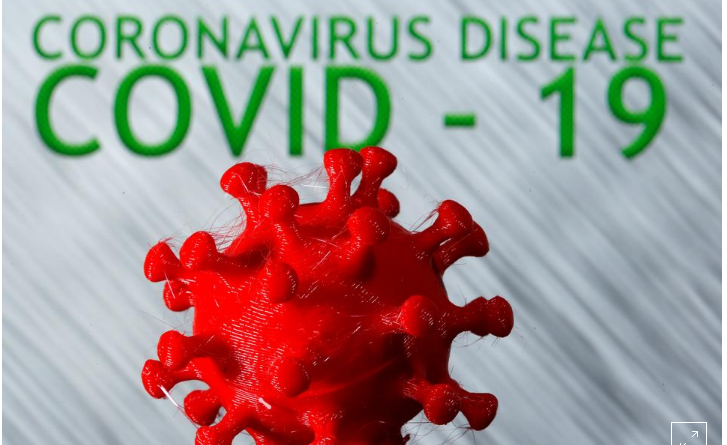 More than three-quarters of recently recovered COVID-19 patients had heart muscle problems show up during magnetic resonance imaging (MRI) tests, German doctors reported on Monday in JAMA Cardiology. In some patients, the heart may be “in serious trouble as a part of COVID-19 disease,” Dr. Valentina Puntmann of University Hospital Frankfurt told Reuters. Among 100 patients ages 45 to 53, “a considerable majority” – 78 – had inflammation in the heart muscle and lining. Sixty-seven had recovered at home while 33 had required hospitalization. Half of the former patients were more than two months out since their diagnosis at the time of the MRI. Thirty-six patients reported ongoing shortness of breath and general exhaustion, and 71 had blood markers of heart muscle damage. Compared with similar people who had not had COVID-19, the recently recovered patients’ hearts pumped more weakly and displayed other risk factors for heart failure. Puntmann suspects the abnormalities are signs of permanent problems. “While we do not have direct evidence for late consequences yet, such as the development of heart failure … it is quite possible that in a few years, this burden will be enormous based on what we have learned from other viral conditions that similarly affect the heart,” she said. (bit.ly/304omz1; bit.ly/3g5PDGH)

Mutation may have made virus more vulnerable to vaccines

A genetic mutation that made the new coronavirus more infectious may also make it more vulnerable to vaccines, researchers believe. The mutation, designated D614G, increases the number of “spikes” on the surface of the virus and makes them more stable, allowing the virus to more efficiently break into and infect cells. The mutation will not pose problems for vaccines now in clinical trials, however, because the extra spikes retain the targets for the “neutralizing antibodies” the vaccines are designed to induce. Those targets, called receptor-binding domains, or RBDs, are the places where the spike attaches itself to the cells it infects. With more spikes, there are more RBDs for the antibodies to bind to in order to neutralize the virus. “The gain in infectivity provided by D614G came at the cost of making the virus more vulnerable to neutralizing antibodies,” the researchers wrote in a paper posted on medRxiv on Friday ahead of peer review. (bit.ly/39vmRNr)

Do-it-yourself masks should have several layers

Do-it-yourself face masks are far more effective at blocking virus-containing droplets if they are made with two or three layers of fabric, researchers advised on Friday in the journal Thorax. Using high-speed video and special lighting, they saw that when masks have multiple layers, fewer droplets generated by speaking, coughing and sneezing escape, and droplets that do escape do not spread as far. There is a tradeoff between protection and breathability as the number of layers increases, but “three layers is quite comfortable,” study coauthor Raina MacIntyre of UNSW Sydney, in Australia, told Reuters. For their experiments, her team compared masks made from a single or double layer of T-shirt fabric, which had a thread count of 170/inch. They also tested a surgical mask. Freeze frames from the video showed that while the surgical mask was most effective, the two-ply cloth mask did a fairly good job at limiting the distance droplets traveled. Even the one-ply mask was helpful. “The effectiveness of a mask depends on several factors other than filtration, which is what we tested,” MacIntyre added. “For example, the outer layer should be made of a water-resistant fabric such as polyester,” she said. “It is also best to use fabrics with high thread count and fine weave.” (bit.ly/3hzumFE)

Pediatricians in Australia report a dramatic increase in severe cases of the eating disorder anorexia nervosa during the pandemic and are concerned that the same thing might be happening among vulnerable young people worldwide. People with anorexia have a pathological fear of becoming fat, and as a result they can become severely malnourished and suffer life-threatening heart damage. At Perth Children’s Hospital, the number of children with anorexia nervosa requiring hospitalization for nutritional rehabilitation since the start of the pandemic has more than doubled compared with the three previous years, researchers said in a paper published on Friday in Archives of Disease in Childhood. Lockdowns may have “disconnected patients from protective factors” like school routine and peer relationships, they speculate. Also, they warn, many patients have additional mental health issues like depression, anxiety and obsessive compulsive disorder, which may be worsened by the increased focus on hand hygiene and fear of contracting COVID-19. “We all urgently need to better understand the reasons why young people with eating disorders have been hospitalized at very high rates during COVID-19, to know how to best help and ensure their physical health safety,” study leader Dr. Yasheer Venay Haripersad told Reuters. (bit.ly/301mEyj)