LAKEPORT — It was two days of back breaking work, but the Hope Harbor Covid-19 Center, was moved to Juvenile Hall in Lakeport last week. This is their third location; Hope Harbor Warming Center on Peckham Court was the initial location, the former Record-Bee building and now Elijah House Lake County Shelter (EHLCS), located at the old Juvenile Hall on 1111 Whalen Lane.

(Lucy Llewellyn Byard for the Record-Bee) Men’s dorm is full, overflows into the hallway at Elijah House in Lakeport where guests from the Hope Harbor Center are now housed.

According to Justin Ammon, the administrative manager at Elijah House, the juveniles who used to be housed there have been moved to Tehama County Juvenile Hall in Red Bluff.

When the Hope Harbor Covid-19 Center’s contract with the County was about to expire, they issued an RFP (request for proposal) seeking an entity or nonprofit to run the shelter.

Elijah House Foundation, headquartered in Oroville with three other locations in Butte, Tehama and Contra Costa Counties, was invited to take over Hope Harbor when their contract was finished.

“We [Elijah House Foundation] submitted a proposal and the Board of Supervisors unanimously approved our proposal,” said John Mitchell, the director of nonprofit Services for Elijah House Foundation. “We’re very grateful to Lake County,” he said, “for providing us with the opportunity to help meet the need of the community and [to] work with community members and organization who have been working hard to serve the vulnerable population of Lake County.”

Elijah House provides housing and behavioral services, support services; meeting the needs of the people while they stay at Elijah House, said Mitchell.

“The idea really came from Pastor Shannon, Behavioral Health, Tina Scott and Social Services. Nothing happened in vacuum,” said District 2 Supervisor Bruno Sabatier via a telephone call. “It was great team work. I don’t know anyone talking about homelessness without Pastor Shannon being there.”

Sabatier last month warned that the loss of the current shelter could have thrown Lake County’s state-approved local variance from Covid-19 reopening guidelines into some uncertainty.

The variance, which had allowed the county to reopen some parts of its economy more quickly, in part requires a county to show it can provide sufficient protection for its homeless residents against exposure to the virus. Gov. Gavin Newsom’s criteria that counties must meet to move beyond curbside business included an ability to temporarily house at least 15% of the county’s homeless population.

Deas referred to Supervisor Scott as, “Our angel.” When asked about her involvement, Scott said, “Naturally I was involved because the center is located in my district. I also take an active role when it comes to finding resources for our neighbors who are homeless. I would like the public to know that providing effective solutions and resources for those who are homeless is critically important if we wish to find positive change for our entire County.”

The contract at EHLCS is short-term, perhaps through October, said Ammon. However, the administration each expressed their desire for it to roll into a long term situation.

Sabatier said, “It does not appear to be a long term contract because we’re using Covid 19 funds. We will have to start again, with new non-COVID 19 contracts. I’m very hopeful that we don’t just do it for the short term.”

Deas proudly gave a tour of the facility, showing off the co-ed community room with its donated large flat screen and couches, the dorm rooms (formerly cells for juvenile offenders with metal toilets and heavy locked doors). “All doors must remain open,“ Deas said. Some were decorated with colored lights. Some were singles and some doubles. “Everything is kept clean,” he said as he showed off the shower rooms and bathrooms.

“All of the guests moved to EHLCS,” said Ammon, “except the ones with dogs; they went to hotels. The total number of beds here is 31. The number of men and women can change depending on needs. They have freedom to move around within the facilities and yard when they want to. But there is scheduled times to leave the property for essential appointments.”

Deas said that Public Health tests everyone for Covid-19 periodically.

One annex room had been converted to a thrift shop of donated clothes where guests can get shoes and clothes needed for job interviews. There are two large rooms that Deas hopes to use for computer classrooms or Alcoholics and Narcotics Anonymous meeting rooms. “The possibilities here are endless,” he said. “But it takes an army to combat homelessness.”

One success story is redhead James Campbell, 28, who arrived at Hope Harbor Covid-19 Center at the old Record-Bee building. Originally from Ohio, Campbell lost his job due to the pandemic. He and a friend traveled to California and landed at the center, homeless. While there, he looked for a job, as well as helping around the center. Being in the right place at the right time, Deas gave Campbell a paying job as support staff and then Campbell became a member of the board as a representative for Hope Harbor guests.

“Now I’ve worked my way up to Case Manager at Elijah House, working with residents, helping them to do what I’ve done. When Gary gave me this job, I thought I’d been pranked and someone would pop out, yelling, ‘You’ve been pranked!’”

“I saved my money,” said Campbell, “and got a little place in Clearlake Oaks. Lakeside property where I can fish off my back porch.”

Campbell’s eyes smiled above his mask. “I’m lovin’ the day!” he said. 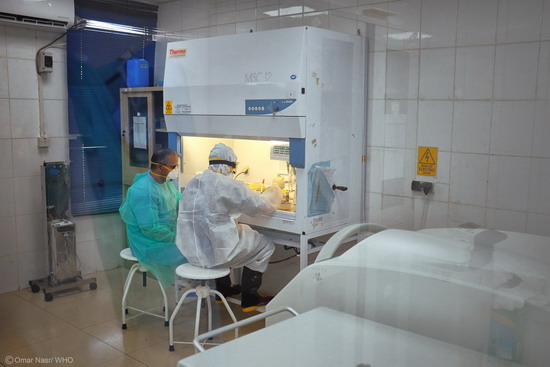 Health care workers, a fragile health system and the looming spectre of COVID-19 in Yemen

FINDING AND STARTING A NEW SCIENCE/ACADEMIC JOB IN A COVID-19 WORLD: THERE IS HOPE!